Big Ted hugged himself with joy, he really was so pleased he was not in a box in storage ... he still did not know what storage was, but he DID know that it would never ever EVER be as much fun as travelling in The Motorhome with his family and Saxon, the big hairy thing that wasn't quite a bear.

Big Ted really enjoyed his time on the ferry ship and he was a bit sad to say goodbye to Captain Louise and Alex, but he was pleased to get back into The Motorhome again and be back on the road. Big Ted was in FRANCE! He liked the look of France, it was very green and there were lots of trees and forests... Big Ted knew that bears lived in forests in some countries, he wondered if France had bears, he hoped so.

Soon they got to their next stop and Big Ted was very pleased to see they were near water again, it was a RIVER!! Big Ted had seen rivers when he was looking at the maps, this one was the river Seine. Big Ted sat and watched the fish jump, the ducks swim by, and the cargo ships...... CARGO SHIPS ?????? Big Ted did not know that Cargo ships sailed on RIVERS!!! he almost fell off of his seat in excitement! 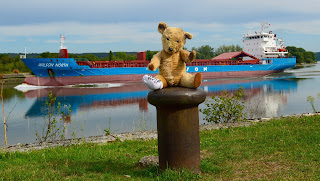 Big Ted sat and watched the activity on the river for hours, he was SO happy. Later, a new motorhome came and parked next to them and a voice asked if he could sit with him and watch the ships too, Big Ted turned round and almost fell off his seat when he saw...... ANOTHER BEAR!!!!  This bear was called George and he was older than Big Ted, he was travelling around Europe with his owners too! George and Big Ted sat and watched the river (and had a bottle of Normandy cider between them) and a new friendship was made. Big Ted did not think it could get any better than this. 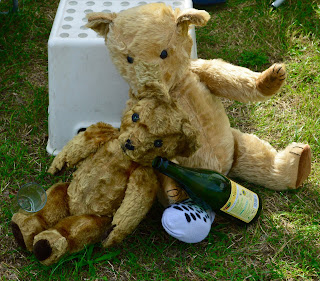 The next morning Big Ted woke up with a headache, that was a new feeling for him, he did not like it, he did not like it at all.. he spent the day relaxing by the river fishing. George Bear did not come out to play at all. His owner said he was 'resting his eyes'. Big Ted caught two tiny fish, he set them free in the river again, he did not feel very hungry for some reason, and he did not think he would be drinking cider again! 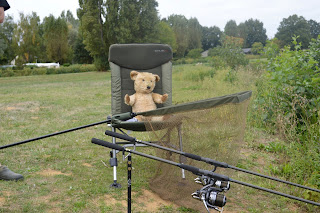